Today I’m kicking off a new series of short posts to share some of the discoveries I’ve come across while researching for my stories. I’ll talk about tidbits of interest behind the stories in Hometown Heroines, in the A More Perfect Union series of historical romances, and fascinating factoids from upcoming historical fiction releases as well. It’s the little-known facts that I find the most interesting, and I want to share those with you.

Today, I’m going to talk about the Old Exchange in Charleston, South Carolina. This building has served an important role in the development of the once prosperous port city. I’m not saying the city is not prosperous today, but in the 17th and 18th centuries, Charles Town was a thriving port city because of its location and association with Boston and Barbados. The Exchange was the place where products arriving and departing for trade with other ports of call were “exchanged” and distributed to merchants for sale. 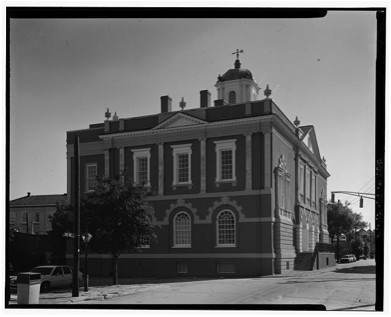 My hubby and I have been to the Old Exchange while I was researching Charleston’s history for the four books in my A More Perfect Union series. It’s featured in the first book, Emily’s Vow, more than in any other in the series. I had several specific questions I needed to answer, so we toured the building with a guide who happened to be a retired school teacher.

This man was a wealth of information, too! He told me all about the uses of the building, but most importantly he was able to tell me what the building looked like in the late 18th century. Which was very different from how it looks today. In the picture of the Exchange, you can see the two floors of the building, with a basement foundation just visible. While this is a circa 19th c. photo from the Library of Congress, it shows approximately how the building appears now. But back in the 18th c. it was much different.

The top floor has always had glass windows and was used for community meetings and celebrations/dances. The middle or main floor, however, used to be an open air marketplace of sorts. No glass windows or even walls, but an open area where people could come and go. Merchants set up temporary desks on the floor of the Exchange to conduct their business. Access to the basement—where merchandise was stored during peace time or prisoners were held during British occupation—was through an outside door, not from the interior as it is today.

Knowing those facts informed the description and usage of the Old Exchange in my stories, helping me keep my stories as accurate as possible. I do try to keep to the historical facts as much as possible. Am I perfect? Probably not. But I do my best to bring the context of the times to my stories.

It’s not surprising that homes are modified and built onto. We still do that today. In fact, the house I live in, we added on to the kitchen to enlarge it. Have you ever lived in an historic home? Or renovated your own house to suit your particular needs?