One of the joys of writing fiction is learning about new people, places, and events. Then being able to translate the facts into a good story. In honor of March being Women’s History Month, I’d like to share some of the research behind my young adult book. In Hometown Heroines: True Stories of Bravery, Daring, and Adventure, I provide both the factual biography of each girl but also a fictionalized account of what made her famous. Each girl is remembered by an historic site—a park, a sign, a railroad trestle, even a mountain—dedicated to her for her achievement(s).

One such girl was Lucille Mulhall, deemed the world’s first cowgirl.

Lucille astounds me by her abilities with both a rope and her equestrian talents. She could ride her horse at a gallop and lean down to snare a handkerchief from the ground – with her teeth! She could out rope men, snagging a calf and tying its feet in record time. She had the reputation of a lady and is credited with helping to integrate women into the rodeo. In 1977, Lucille was inducted into the Cowgirl Hall of Fame.

My hubby and I traveled to Oklahoma to research her life. She grew up among roping and branding, bronco busting and shooting rattlesnakes. She competed against men in a man’s sport and won, yet kept her femininity and morals intact. Hailed by Will Rogers as the first famous cowgirl, she was a champion at steer roping and trick riding.

She had a trick horse named Governor who could do amazing stunts that one newspaper reported (according to Kathryn Stansbury’s book Lucille Mulhall: Wild West Cowgirl) as “He picks up a handkerchief, goes lame, plays dead, rings a bell, takes off his mistress’ hat, walks on his knees, picks up a whip, and sits on his haunches and crosses his forelegs.” He became almost as famous as Lucille.

One of her best roping achievements happened when she was twenty during a competition for the best average roping time of three steers, held at Coffeyville, Kansas, in September 1905. Her first time was thirty-two seconds, her second forty seconds, and her third forty-two seconds. She won one thousand dollars and became Champion Steer Roper. 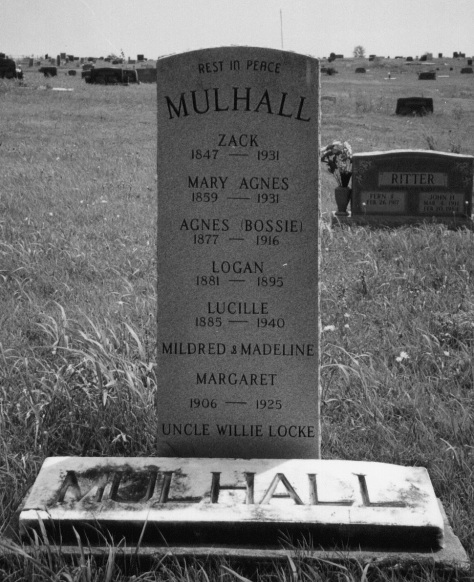 We visited Mulhall and then climbed the hill to Roselawn Cemetery, overlooking the town, where she is buried with her family. She died in December 1940, a few months after her last performance, after being in a car accident near her home on the Mulhall Ranch. She’d been first buried on the ranch in a mausoleum, then all the family caskets were relocated to the cemetery. It wasn’t until the 1980s that the marker was added to the once unmarked grave.

She and the other girls in Hometown Heroines continue to inspire me to strive for better, to do more and be more. What or who inspires you?