The where of a story anchors the characters as well as the readers regarding the place and time of the tale. In order to write my A More Perfect Union series, I needed to create a visual of the city of Charles Town, South Carolina, during the American Revolution versus the Charleston of today. Since my characters mainly lived inside the city limits, understanding those limits versus today’s boundaries was imperative.

My husband and I visited Charleston twice over the years it took me to write the four stories. The first time we stayed in the John Rutledge Bed and Breakfast, specifically so I could experience the sights and sounds of the home where one of South Carolina’s first governors lived in the 18th century. We also took a walking tour of the historic district with all of the 18th century homes and some of the cobble stone streets. And we enjoyed an elegant meal at McCrady’s Tavern off of Bay Street, a place where George Washington ate on his southern tour during his first term as president. If you haven’t been to this beautiful and charming historic city, I strongly encourage you to make it a destination for a future vacation. 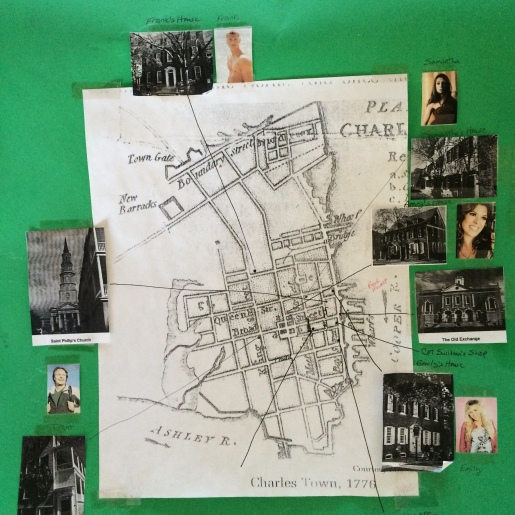 I realized early on a visual aid would be beneficial. So I located a hand-drawn map of the city as it appeared during my time period. Of course, it was too small for my purpose of locating where my characters would live and the kind of houses they’d live in. So with the help of my creative son, I (read: he) made an enlarged copy and I glued it to a piece of poster board.

Then I chose images from the walking tour guide of several houses, ones that seemed to suit the life styles of my characters. I glued those onto the map, along with the picture of how I imagine my characters would look. I also marked the locations of the market and a few other places mentioned in my stories to ensure that I accurately described how the characters navigated through the streets of the city to go various places.

I don’t often make visual aids, such as my map, but it proved useful indeed. Especially when Emily had to visit Samantha in Emily’s Vow (Book 1) and when Benjamin escorted Amy to Samantha’s house in Amy’s Choice (Book 2). Also Samantha, in Samantha’s Secret (Book 3), needed to walk from her home to where Benjamin stayed at Captain Sullivan’s quarters above his import shop. Or when Evelyn, in Evelyn’s Promise (Book 4), had to find her parents when they were out for a stroll. To learn more about each of the stories in the A More Perfect Union series, please visit my website where you’ll find their descriptions and where you can purchase them.

Like most historical fiction/romance authors, accuracy is important to the extent possible based on source materials. Sometimes we can’t know the answer to a question because it’s not documented. But in this case, having the street map ensured I could describe the town as it existed during the time period of my series.

Thanks for stopping by! Until next time, happy reading!