Westward expansion of America happened through the courage and dauntless efforts of many pioneers. Among them was Virginia Reed, who at age 12 years survived one of the most dangerous and horrific winters. She was a member of the ill-fated Donner Party.

The idea to move to California came from Virginia’s father, James Reed. Neighbors Jacob and George Donner decided to join the Reeds on the journey west. The group was known as the Donner Party. They left Springfield, Illinois, on April 14, 1846, with a total of thirty-one people in the wagon train. By the time they departed Ft. Bridger, Wyoming, on July 31, 1846, there were seventy-four people and nineteen wagons in the wagon train.

Crossing the plains, Virginia’s grandmother died. The party paused to bury her and then moved on. Virginia had to desert her pony when it couldn’t keep up with the caravan of wagons any longer. She was heartbroken over the loss of both. Little did she know just how many more trials waited for her and her family.

As they struggled to climb the Sierra Nevada Mountains with their wagons and oxen, men, women, children helping to push, pull, and carry their possessions, winter descended upon them, a heavy blanket of snow that refused to melt for months. Many died. The Reeds boiled the leather covers of their books and Bibles and ate it as soup. They were trapped until men wearing snowshoes could come rescue them.

The group that was snowed in at Donner Lake consisted of eighty-three people. Of those, forty-two died at the lakes. Only eighteen of the original thirty-one people who left Springfield, Illinois reached California in February 1847.

Writing Virginia’s story was difficult, mainly from trying to imagine what she would be thinking, feeling, worrying about. I don’t like cold and snow, so that part was fairly easy for me. But the rest of her challenges and sorrows – I felt so bad for her, and all that she endured, and survived. 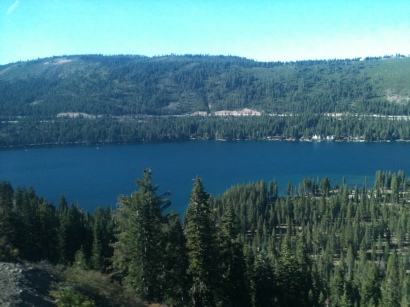 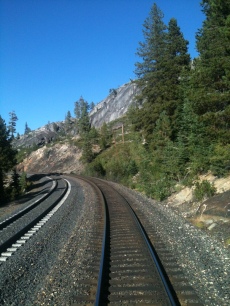 A couple years ago, I actually rode a train through Donner’s Pass as part of a tour of several national parks. I wish I had chance to visit the nearby Donner Memorial State Park but since we were traveling by train, that wasn’t an option. But the scenery was beautiful! At least in the late summer/fall. But to imagine walking up the mountain slopes reminded me of the very difficult adventure Virginia and her family had faced.

We all have faced our own challenges, though most likely not like the Donner Party. My biggest personal challenge was breast cancer (20 years ago), at a time when my children were 7 and 5. Writing Hometown Heroines (the first edition that released in 2001) helped me get through a very dark period in my life. The inspiration of each of the girls’ stories gave me hope for my own future.

What about you? What has been your biggest challenge that you’ve overcome?

Thanks for stopping by and sharing your thoughts and opinions! Until next time!

Interested in your own copy of the book? You can find it in ebook and/or paperback at the following sites: