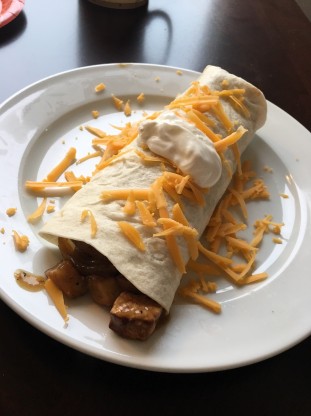 Another Tasty Tuesday brings some spice to our meals! Help me welcome Amy Rivers and her tempting burrito recipe, one her main character inspired for her. I’m off to find some green chilies… Take it away, Amy!

Being a New Mexico girl, I’ve always believed that everything is better in burrito form. Just wrap it up in a tortilla and enjoy! In my novel, Wallflower Blooming, Val Shakely starts nearly every morning with a breakfast burrito and a cup of coffee from her favorite local dive. This isn’t a far cry from my own mornings when I worked in marketing. We had a great burrito bar across the parking lot where you could choose from dozens of delicious combinations of proteins, veggies and toppings to create the perfect burrito to match your mood.

My favorite burrito is a green chile pork and potato burrito that was inspired by a restaurant in my hometown. Here’s how it goes:

I can green enchilada sauce

This mix makes a delicious burrito and it also works well as taco filling and over rice. Top with shredded cheese, sour cream, salsa, or all of the above.

Our local burrito stop had everything from traditional breakfast burritos with eggs to tasty carnitas with all the fixings. When I was writing Wallflower Blooming, I always pictured Val with a ground beef and potato burrito, another of my favorites. I spent a lot of time hungry while I was working on this book!

Amy Rivers was born and raised in southern New Mexico and currently resides in Colorado. She had an idyllic childhood despite a severe visual impairment. Perhaps because of her disability, she learned a lot about compassion and empathy from a young age. Her interest in social issues and violence prevention led to a Master’s degree with concentrations in Psychology and Politics. She was the director of a sexual assault response program and remains an advocate for social justice. Amy has been published in Chicken Soup for the Soul: Inspiration for Nurses, Novelty Bride Magazine, ESME.com and Splice Today. Her first novel, Wallflower Blooming, was published in August 2016.

Val Shakely is a list-maker. Daily routine. Check. Calm, quiet (but successful) business. Check. No drama. No excitement. Some might call it boring, but it’s precisely the way Val likes it. She loves her hometown of Cambria, nestled in the mountains of Colorado, and runs a fruitful PR firm. And that’s more than enough for Val. So what if she doesn’t have a social life? Then, her cousin Gwen decides to take on the local political bully, the Mayor, in head-to-head combat for the Mayoral seat and Val takes her company reluctantly, and against her better judgment, into the fray. The minute Val takes on Gwen’s campaign, the safe world that she has carefully constructed begins to unravel. She feels the pressure of the campaign and the personal attacks by Gwen’s opponent. And as if that wasn’t complicated enough, Val finds herself falling in love. Val’s desire to stay on the sidelines is put to the test and she’s forced to reexamine the life she’s built as she trudges toward a new and more exciting future.

Did you find that recipe as tempting as I do? And her story sounds wonderful, too! Thanks again, Amy, for sharing your yummy recipe with us!

p.s. If you haven’t already, please consider signing up for my newsletter, which I only send out when there is news to share. News like new covers, new releases, and upcoming appearances where I love to meet my readers. Thanks and happy reading!

p.p.s. I’m gearing up to release several new books over the next year so be sure to sign up to be on the inside scoop for when they’ll be available!