Tasty Tuesday has arrived along with a refreshing adult beverage recipe from Barbados by author Sandra Masters. Tell us more about it, Sandra!

On a hot day (and there are many of those in Barbados), many Bajans reach for a refreshing glass of mauby to quench their thirst and cool down.

Mauby is made from the bark of the Mauby tree, boiled with cinnamon, orange peel, nutmeg and cloves, and sweetened to taste.

It is rather a unique flavour, with a bitter aftertaste, and some people really dislike it! But of course it’s a favourite of many others. So it’s worth at least trying… you might find yourself adding it to rum punch, coconut water and Banks beer as your go-to drinks in Barbados!

Mauby was traditionally sold by vendors who walked around the towns & villages dispensing the delicious drink from buckets expertly balanced on their heads. Today mauby is on the menu at many local cafes and even at the Chefette chain of fast food restaurants.

A Regency Romance with an Element of Suspense

After three years in England, Thorn Wick, the duke’s bastard son, perfectly flawed, still fights for acceptance in his father’s world as a renowned Argamak Turk horse trainer. Just when he starts to believe in fairy tales, another obstacle looms to thwart his plans: on a dangerous mission to Barbados, Thorn is stunned when secrets are revealed about his mother. Will he exact revenge for the foul deed?

Alicia Montgomery, ward of the duke, is in love with Thorn. Strong willed and adventurous, she determines she can convince him to admit his feelings. But the reality of loving Thorn too much almost destroys her.

Can Alicia quell Thorn’s demons and prove love can pave the way to their happiness to fulfill their destiny? 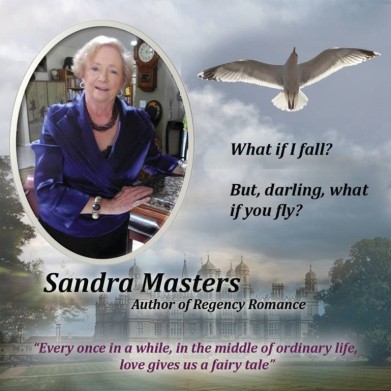 From a humble beginning in Newark, New Jersey, a short stay at a convent in Morristown, N.J. at the age of fourteen, Sandra Masters retired from a fantastic career for a play broadcasting company in Carlsbad, California, and settled in the rural foothills of the Sierras of Yosemite National Park with her husband, Ron, and two dogs, Silky and Sophie. She traded in the Board Rooms for the Ballrooms of the Regency Era and never looked back.

She wrote her first book at the age of thirteen and since then she’s always traveled with pen and notebook for her writing experiences. It’s been the journey of ten thousand miles with a few steps left to go. She deemed it a pleasure to leave the corporate world behind decades later.

Nothing she expected, but everything she desired. Her business card lists her occupation as Living The Dream.

Get to know her and her stories at www.authorsandramasters.com

Sounds good to me! Did you find that idea as tempting as I do? Thanks again, Sandra, for sharing with us!