Sometimes a story is inspired by true life events. Sometimes by a “what if” pondering. Haunted Melody* sprang into being when my editor at Liquid Silver Books asked for a Halloween story.

At the end of Undying Love**, Paulette is pregnant and expecting a child to arrive around Halloween. So I decided to tell her story as she approached delivering her baby. How she had become somewhat depressed after her boyfriend dumped her and she had lost her joy, expressed through singing.

She needed a nudge to make her realize that she’d stopped singing during her daily activities. But how? Or rather, who would give her the hip-bump toward her happiness? She needed to face her past as she planned her future, so one day she’s exploring the attic and discovers a book of spells. When she reads a “poem” from it, she is surprised to confront her grandfather’s ghost. The spirit refuses to leave until she figures out why she’d summoned him.

Enter Zak Markel, a chemist who is desperate to save his brother Grant’s eyesight. Desperate enough to try a mystical alchemical recipe for the Elixir of Life from an ancient journal even as he knows there’s little hope of succeeding. Then he catches an eyeful of Paulette and his pursuit turns more personal as he endeavors to get to know her despite her reluctance and his brother’s annoyance. <grin> Together they rediscover what’s missing in her life and his, and find their happiness together, though not without a few struggles along the way!

The fun part of telling Paulette and Zak’s story was including an actual play list, which I’ve shared in this earlier post. But also in imagining a fun and chaotic costume party with costumes and themed food. I even tried some of the recipes when the original book* first released in October 2014. Now you can read Haunted Melody (March 2017), to see what fun is had at the party, and the ensuing chaos her grandfather’s ghost causes.

Have you read Haunted Melody yet? I hope you have! But if you haven’t, you may want to before the third book in the Secrets of Roseville series releases on May 20, 2017. The Touchstone of Raven Hollow tells the story of Tara, the midwife/healer, and Grant Markel, Zak’s brother, as they learn a few lessons about life and love. And ravens, too!

Keep an eye out for info about a Facebook release day party I’m throwing with the help of several author friends! Lots of fun, prizes, giveaways, and book talk. More details coming soon…

*Haunted Melody originally released as Remnants (October 2014, Liquid Silver Books) and is an updated/revised edition of the story.

**Undying Love originally released as Traces (April 2014, Liquid Silver Books) and is an updated/revised edition of the story. 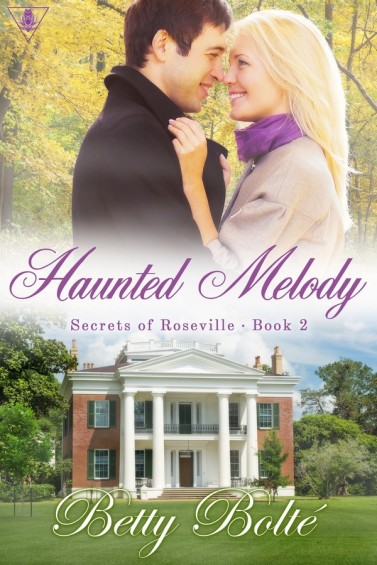 Paulette O’Connell needs to build her home decorating business in order to give her unborn child a stable home. While exploring the mysterious attic of the antebellum plantation where she lives, she accidentally summons her grandfather’s ghost. But he won’t leave until she figures out why she needed him in the first place, putting her plans in serious jeopardy.

Zak Markel has been searching for the last ingredient to create the Elixir of Life he hopes will save his brother’s eyesight. But he discovers the woman of his dreams in the smart and beautiful Paulette, distracting him from his focus at the worst possible time, even though she staunchly refuses to allow him past her defenses.

Can he convince Paulette to open her mind to possibilities and follow her heart to true happiness before it’s too late?