Researching for each of the girls’ stories in Hometown Heroines: True Stories of Bravery, Daring, and Adventure led me across America. I traveled a good bit—exploring sites in Maryland, Virginia, Louisiana, Oklahoma, Kansas, New York, Georgia, and Alabama, to name a few—but was not able to visit every site I would have liked to have reached. Mainly out west and northwest, but other places as well. The story of Lavinia Ream, known by those close to her as Vinnie, is one such example.

Lavinia Ellen Ream, known as Vinnie, was born September 25, 1847, in Madison, Wisconsin. I’ve vacationed in Madison but did not have a chance to search for any sites associated with her. Partly because I went long after I had written Hometown Heroines, and partly because it was a family vacation for Christmas.

Vinnie’s earliest playmates were Winnebago Indian children because there were few if any other white children to play with. In fact, her sister Cynthia Ann Ream, known as Mary, was born in 1844 in Madison, Wisconsin. Mary was one of the first white girls to be born in the Wisconsin area. The Winnebagos taught Vinnie how to draw and paint, a skill she put to very good use throughout her lifetime. I wonder what games they played and how this experience affected Vinnie’s view of diverse peoples she met.

The following is an excerpt from Hometown Heroines, the biographical facts I included:

Vinnie’s childhood was spent moving around quite a bit. Her father was a surveyor, and so would travel to find work. They lived at various times in Madison, Wisconsin; Little Rock and Ft. Smith, Arkansas; St. Joseph, Missouri; Wyandotte and Leavenworth, Kansas; and Washington, D.C.

When they moved to D.C. at the beginning of the Civil War, they settled in a cottage at 325 B Street North. Her father joined a Capitol guard unit. Her brother Bob had enlisted in Woodruff’s artillery regiment. To earn money to support the family, Vinnie, her mother, and her sister, all sewed epaulets for the officers uniforms.

After studying sculpture with Clark Mills for a while, she began making medallion reliefs of politicians. Then she had the idea of creating a bust of Lincoln. She was given permission by Lincoln only because she was poor, like he had been when he was younger.

I came for half an hour every day. I was the merest slip of a child, weighing less than ninety pounds; and the contrast between the raw-boned man and me was indeed great. I sat demurely in my corner and begged Mr. Lincoln not to allow me to disturb him.

She went to the White House frequently, watching him. Trying to capture his personality in clay.

I think that history is particularly correct in writing Lincoln down as the man of sorrow. The one great, lasting, all-dominating impression that I have always carried of Lincoln has been that of unfathomable sorrow, and it was this that I tried to put into my statue.

The death of Lincoln caused his memory to be locked in hers forever.

The success of the statue that I subsequently made was attributed to its trueness to the actual Lincoln. My ability to produce it was unquestionably due to those half-hours in the quiet of the President’s office, and to the searing in of the image by the great tragedy.

In April 1866, Vinnie was encouraged to apply for the commission to create a life-size marble statue of Lincoln. With help from friends, a petition was written and circulated, and signed by many of the most powerful men in Washington. The commission was granted to her on July 28, 1866, and the contract for the statue was written and signed on August 30, 1866.

I enjoyed visiting D.C. and seeing her work in person in the Rotunda. While I was there, I also went to see her statue of Admiral Farragut. Here’s more on it from Hometown Heroines:

Vinnie was commissioned, again after much debate, to create a statue of Admiral David Glasgow Farragut. The contract for the statue was written and signed January 28, 1875. The statue was cast from the bronze propeller of his flagship, the Hartford, in which he had achieved his best success. The statue, resting on a base made out of Maine granite, stands on Farragut Square, on K Street between 16th and 17th Streets in Washington, D.C. It faces south and stands ten feet high, with Farragut holding a marine glass in his left hand, and resting his left foot atop a block and tackle. Vinnie was paid twenty thousand dollars to create the statue.

During the six years she spent making the Farragut, First Lieutenant Richard Hoxie proposed to her. She refused him, saying her work must come first. Only after Mrs. Farragut advised her to go ahead and marry, that the statue would wait, did Vinnie accept the proposal. She married Lieutenant Richard Leveridge Hoxie on May 28, 1878. Lieutenant Hoxie was assigned to the Corps of Engineers, United States Army.

The Farragut was unveiled and dedicated on April 25, 1881, amidst much ceremony. An account of the day was found in a local paper:

It was an inspiring sight. Besides the vast multitude of civilians; the host of soldiers and sailors, in their glittering uniforms; the rainbow hues of the Spring appareling of thousands of women; the decorated houses surrounding the square, glinting with flags and filled with bright faces from basement to roof–all were framed in the delicate interlacing of the young leaved trees and mounted by the snowy tracery of the delicate clouds, that fluttered like feathers against the warm blue of the April sky. President Garfield’s speech was happy, as his speeches always are.

Vinnie’s art and sculpture were not her only talents, though. She also wrote songs and poetry. Others dedicated their songs and poetry to her. Her life was filled with people who admired her enough to seek her out and praise her art and talents. Her example inspires me to live my life the best I can, and to strive to create stories that touch my readers in some way.

After she died at her Washington home in 1914, she was buried at Arlington National Cemetery. Her husband erected a monument to her in 1915. Here’s more on it from my book:

Brigadier General Richard Hoxie had a monument built in 1915 to Vinnie in her memory. It stands in Arlington Cemetery, in Section 3, on Miles Drive. The statue is a bronze likeness of her marble Sappho statue. His sense of loss is felt in the inscription “Words that would praise thee are impotent” engraved in the bronze plaque in the base along with her bas-relief profile. A stone bench faces the monument, inviting visitors to linger, as Vinnie would have wanted.

When I visited her grave, I sat down on that bench and thought about all this wonderful woman had accomplished in her life. I thought about how much her husband mourned her but also how much he loved her. I decided to try to include those ponderings in the short story I wrote for the book. Then when I got up, distracted by my musings, I actually left behind my Dayrunner calendar/address book. Which then my brother-in-law had to track down and return to me, but that’s another story you can read here. 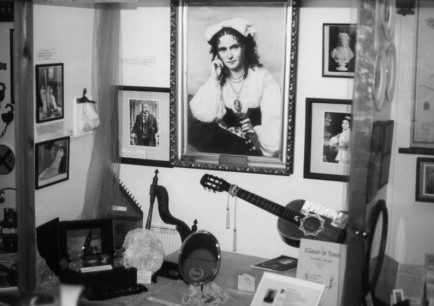 I wish I had been able to visit so many places associated with Vinnie. I did manage to get to Vinita, Oklahoma, though, and it’s small display of her art, guitar, and other memorabilia. The town itself is named for Vinnie by her friend Col. Elias C. Boudinot, a Cherokee. She had some fascinating friends, didn’t she?

Each story in Hometown Heroines includes a list of places you can go to related to the girl’s life and accomplishments. Have you read the inspiring and amazing stories of these girls who lived in the 1800s in America? Have you traveled to any of the parks, monuments, or statues dedicated to them? Would you like to?

During the 1800s, daring and courageous girls across America left their unique mark on history.

Belle Boyd risked her life spying for the Rebels during the Civil War.

Kate Shelly, when she was 15, crawled across a nearly washed-out railroad bridge during a ferocious thunderstorm to warn the next train.

These are just a few of the inspiring true stories inside Hometown Heroines—American Girls who faced danger and adversity and made a difference in their world.