It’s Tasty Tuesday once again. Time to dive into the ins and outs of cooking techniques and the preparation of various vegetables available on typical dinner tables of the colonial and Early American period.

We’ve all seen campfires and open hearth cooking fires, if not in person then in a movie or documentary, right? Have you ever thought about how you’d cook dinner or breakfast? I think maybe one day I’ll enroll in one of those colonial or primitive cooking classes to find out exactly how they managed over an open flame.

For now, I will rely upon the guidance of Virginia Elverson and Mary Ann McLanahan who wrote Revolutionary Cooking. They note that: 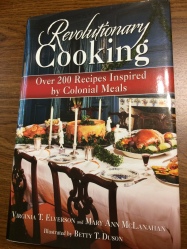 Most cooking was done in large iron pots; in the fireplace the pots were suspended over the fire or raised above the embers by means of little legs. Lug poles of wood or iron were built into the fireplace wall, providing a rack on which to suspend the cooking pots. These poles were later replaced by a more practical swinging crane. The distance from the fire was adjusted by S-shaped hooks, adjustable trammels and chains. Though utensils had long handles, the cook in her long full skirt had to be extremely careful to avoid live coals and spitting grease. The floor was swept constantly and scrubbed around the hearth to prevent the house catching fire. (p9-10)

Apparently, most foods were cooked by stewing, slow boiling, or roasting. A dish that combined both meat and vegetables was known as a “made dish,” which was easier to make. Frying was avoided due to the inherent danger of fire from spitting grease. Roasting was done on a spit which was turned by hand, most often the job of one of the children in the family. A pan beneath the skewered meat caught drippings to be used in making other dishes.

I was amazed by the variety of vegetables that were available to American cooks in the 18th century and beyond. The Art of Cookery gives specific directions on how best to prepare spinach, cabbage and “young sprouts,” carrots, turnips, parsnips, broccoli, potatoes, “cauliflowers,” French beans, artichokes, and asparagus.

The overall directions from The Art of Cookery Made Plain and Easy for how to dress “greens, roots, etc.” I think is good advice yet today:

ALWAYS be very careful that your greens be nicely picked and washed. You should lay them in a clean pan, for fear of sand or dust which is apt to hang round wooden vessels. Boil all your greens in a copper or sauce-pan by themselves, with a great quantity of water. Boil no meat with them, for that discolours them. Use no iron pans, &c. for they are not proper, but let them be copper, brass or silver.

The techniques used in the 18th century really were similar but at the same time very different from our options today. The directions for “dressing” the vegetables all steer the cook toward boiling them, greens in a “great deal of water” and potatoes in “as little water as you can, without burning the sauce-pan.” Interestingly, for both broccoli and asparagus Mrs. Glasse recommends the following presentation:

When the stalks are tender it is enough [they are ready to eat], then send it to table with a piece of toasted bread soaked in the water the broccoli is boiled in under it, the same way as asparagus, with butter in a cup.

It took me a little while to figure out why the butter is put in a cup. The melted butter is to be used for dipping the stalks with your fingers before eating them. Keep in mind that forks weren’t a common utensil in America until the second half of the 18th century. (More on the history of forks can be found here.) Then they would have been more frequently used by the upper echelons of society. The Art of Cookery is geared more toward the middle and upper class since the cook needed some education in order to read and understand the instructions. Literacy was not necessarily a priority when building a new society, at least not for the working men and women laboring to literally build farms and towns.

Next time I’ll share the first adapted recipe, Stewed Spinach and Eggs. For the complete schedule of what I’ll be sharing in the weeks and months ahead, check out this post.

Do you find it interesting to think about how our abilities, habits, and things we take for granted have evolved along with the new technologies? What else do we take for granted as having been around forever, like forks, but actually have not been around all that long? I can think of hot pads, since the early cooks used their long skirts often times to pick up hot vessels. What else?