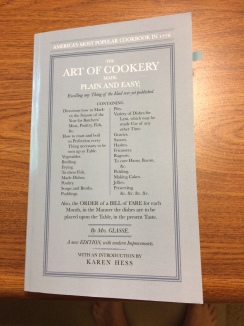 Tasty Tuesday brings us to my adaptation of Potato Pudding from The Art of Cookery. The original recipe seems fairly straightforward until you consider the methods of cooking available then versus today. So let’s start with what Mrs. Glasse would have us do, shall we?

Boil two pounds of potatoes, and beat them in a mortar fine, beat in half a pound of melted butter, boil it half an hour, pour melted butter over it, with a glass of white wine, or the juice of a Seville orange, and throw sugar all over the pudding and dish.

The first stumbling block for me is that I do not own a mortar. But I do own an electric mixer that I use to make mashed potatoes for special occasions like holidays.

I’m going to guess that I used about one pound of potatoes, but to be honest, I did not weigh them. I used these four because I thought it would be enough for two to four servings, which it ended up being.

The second boiling of the potatoes would have been done in a tightly woven cloth placed in a kettle of boiling water over a fire. After thinking about the options, I decided to spoon the whipped potatoes

into a casserole dish and then I could bake the final casserole instead of boiling it again.

Notice that she also blended butter, wine or the juice of a Seville orange, then threw sugar over everything, which was intended to counter the bitterness of the wine or orange. I chose to use butter and sweet orange juice to approximate the blend of flavors she was aiming for. My hubby is not fond of wine in sauces, so I didn’t choose to use it but feel free to try some if you’d prefer.

Be careful when you go to melt the butter! I put it in the microwave for what I thought was a short amount of time, but the butter ended up exploding. I had to clean up the mess and try again to achieve the desired result.

The resulting casserole was indeed a hit around here. It was fairly easy to make and again included only whole, fresh ingredients readily available at my local grocery store. I hope you try it and enjoy it as much as we did.

Wash, peel and cut up the potatoes into large pieces

Cover with water in a saucepan and boil until just tender

Drain the water from the potatoes.

Beat with mixer until creamy but sticky

Combine 1 T melted butter and ¼ cup OJ. Pour over casserole and warm through.

I think this may become a new favorite dish to make. What do you think about wine in the sauce? Should I have tried it anyway?

The second book in the A More Perfect Union historical romance series, Amy’s Choice, continues the saga of women seeking personal independence during the American Revolution. 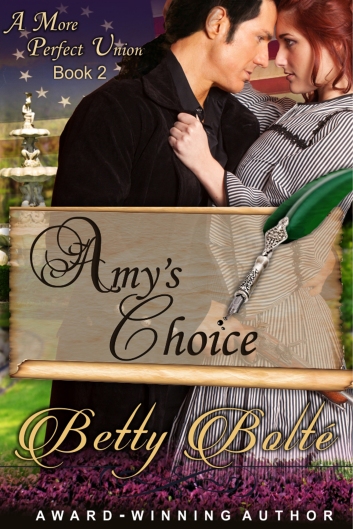 When Amy Abernathy’s childhood sweetheart, Benjamin Hanson, leaves to fight in the American War for Independence without a word of goodbye, Amy picks up the pieces of her heart and chooses independence. When Benjamin returns unexpectedly, Amy flees to the country to help her pregnant sister and protect her heart.

Benjamin Hanson knows he hurt Amy, but he also knows he can make it up to her after he completes his mission. Then he learns that Amy has been captured by renegade soldiers. Now Benjamin faces his own choice: free the sassy yet obstinate woman he’s never stopped loving or protect Charles Town from the vengeful British occupation.