Have you ever driven past a historic site multiple times yet didn’t take the time to find out what the significance of the place might be? I’ve lived in the Tennessee Valley for almost 15 years now and have driven the highway that passes the Russell Cave National Monument countless times in that span. I wanted to visit to see what northern Alabama/southern Tennessee caves looked like since, in The Touchstone of Raven Hollow, Grant and Tara end up in one. My hubby and I almost stopped in on a return trip from Virginia a few months ago, but it was a rainy day and we decided to keep going. But we finally had a free Saturday on a beautiful day in June to make the short trip to investigate the monument.

We decided to make a day of it and packed a picnic and our books to read under a shady tree. We set out mid-morning and arrived at the National Park a little after 11:00. On the way in, I saw a sign that read, “Historic Shelter Cave,” and wondered what that meant. I would soon find out. 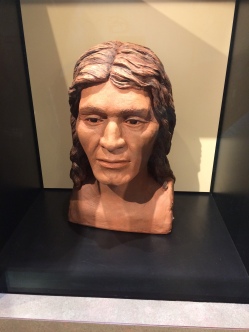 The cave is named after a Revolutionary War officer, Colonel Thomas Russell, who once owned the land known as the Russell farm where the cave is located. We browsed through the museum in the visitor’s center, learning about the people who once lived there. We saw a likeness of what a man of that period looked like as well as the kinds of weapons and tools they would have used. They mentioned the atlatl, a kind of leveraged spear that increases the speed and force of the thrown weapon. I was reminded of reading of the same kind of hunting spear in Jean Auel’s Clan of the Cave Bear series and wondered about the linkage.

A quick search online revealed the history of the device. According to quart.us, they were first used in Europe (where the Clan books take place) during the Paleolithic or Stone Age around 17,000 BC. People migrating across the Bering Land Bridge brought them around 15,000 BC. The atlatls were used in North America during the Paleo-Indian and Archaic periods. I like to know the linkages between places and times to have a better grasp of the flow of history and how people moved about.

A stream flows into and through the sheltering cave where people lived and worked for thousands of years. That’s a ready supply of water without having to venture out of the cave. There seems to be some uncertainty as to whether people lived in the cave year round or only during the fall and winter, but thousands of artifacts have been

found. Including the Russell point arrowhead which is a style only found in this cave. Baskets, pottery, spear points and other cutting and scraping tools, jewelry as well as the charcoal remains of fires were found inside during the archeological dig conducted by first the Tennessee Archeological Society and then by the Smithsonian Institution with support by the National Geographic society. Most if not all of the tools were made using limestone, an abundant kind of stone in the Tennessee Valley. 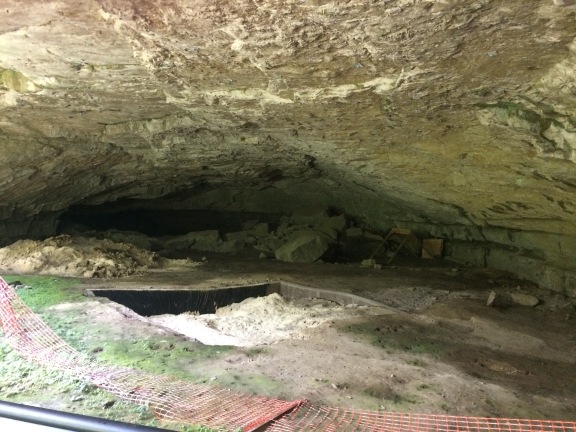 The cave itself seems to have some structural concerns as there are large bolts spaced across the ceiling to keep it from falling. Indeed it appears some erosion and rock fall has occurred. We saw swallows darting in and out of the shelter but no other wildlife. Overall, it’s a very peaceful place with the merry sound of the river flowing gently by and the birds calling to one another.

We ate our lunch out front of the visitor’s center where picnic tables were situated under several large deciduous trees and pines. We were surprised to be joined by an unexpected companion, an old black dog

we later found out is named Scoot and is 17 years old and visits from a neighbor’s property. Scoot looks an awful lot like our Sierra dog, which was rather startling when I first saw him. He kept us company for a time, which was rather sweet of him.

After we’d finished our picnic, we packed up and headed on into Tennessee to the Franklin-Marion State Forest. Why? That’s another story I’ll share next week.

So what historical sites are in your area that you haven’t visited – yet?

He dug for the truth and found her magic…