Today’s Tasty Tuesday post is about making oyster sauce from scratch. I’ve never had this kind of sauce before, so it was an interesting challenge to make it. Unlike the broth recipe that required a good deal of adjustments, this one proved remarkably simple to tweak into an easier version. Let’s start with the original recipe…

Oyster Sauce is made thus.

Take half a pint of oysters, and simmer them till they are plump, strain the liquor from them through a sieve, wash the oysters very clean, and beard them; put them in a stew-pan, and pour the liquor over them, but mind you do not pour the sediment with the liquor; then add a blade of mace, a quarter of a lemon, a spoonful of anchovy liquor, and a little bit of horse-radish, a little butter rolled in flour, half a pound of butter nicely melted, boil it up gently for ten minutes; then take out the horse-radish, the mace, and lemon, squeeze the juice of the lemon into the sauce, toss it up a little, then put it into your boats or basons.

So the first consideration was the oysters themselves. I’ve seen how oysters are shucked (opened and shells removed) and knew that was not something I wanted to include in making this sauce. Nope. So I went to my grocery store and bought a pint of oysters shucked and ready to use. That way I didn’t need to figure out how you beard an oyster…

Then the equivalencies for a “blade” of mace and “anchovy liquor.” Both easy enough to deduce. A blade is a small piece of the spice, but since the original recipe called for removing it and I’m using ground, I reduced the amount from the approximate equivalence of one-half teaspoon ground mace equals a blade, to one-quarter teaspoon. The anchovy liquor is created by simmering anchovies in water and salt, which Fish Sauce lists as the only 3 ingredients. So I used a tablespoon full of that.

The horseradish is subjective, a “little” is a matter of taste after all. I found where one tablespoon fresh horseradish is the same as two tablespoons prepared. Again, since it’s supposed to be removed, I reduced the amount to one-half tablespoon.

I love the idea of rolling butter in flour. It seems to be a fine way to measure the right proportion needed. I chose to use one tablespoon stick butter (unsalted) and rolled it in flour until covered and then added it to the saucepan. 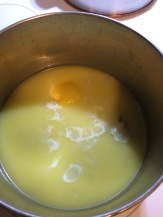 The resulting sauce was good and I’m likely to do it again but with a few minor changes. First, we tried it with grilled steak but didn’t like the combination of flavors. The next night we had the remainder over baked salmon and we enjoyed that much more. Second, I think after simmering the oysters the first time, cutting them up a bit would make a more balanced sauce instead of having the whole oysters in it.

So here’s what I ended up with.

8 oz. raw oysters, shucked and cleaned, ready to use 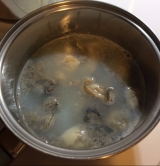 Simmer 8 oz oysters in their juices on medium heat for about 10 minutes.

Strain and reserve the liquor.

Place oysters in a saucepan and add remaining ingredients.

Remove the lemon, squeeze the juice into the sauce.

So what do you think? Does this sound like something you’d like to try? Do you know how to shuck oysters?

The fourth and final story in the A More Perfect Union historical romance series follows the trials and decisions of Evelyn and Nathaniel as they try to adjust to life after the British occupation of Charleston. 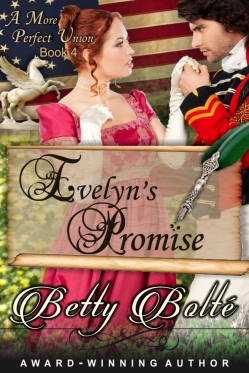 Determined to make her own way in the newly independent America and live free of the dictates and demands of another husband, widow Evelyn Hamilton faces soaring post-war inflation as she struggles to provide for herself and her infant son.

Militiaman Nathaniel Williams visits Charlestown, where his heart is ensnared by a smart, beautiful widow, forcing Nathaniel to make the hardest decision of his life.