This week’s Tasty Tuesday recipe was a delicious challenge to make. I’ve only ever roasted a duckling once before and that was a long time ago. Which is why I added it to my schedule of recipes to adapt. This one ended up being done very differently from the method used by Hannah Glasse. Here’s what she recommended as a method of cooking duckling dressed with green peas. 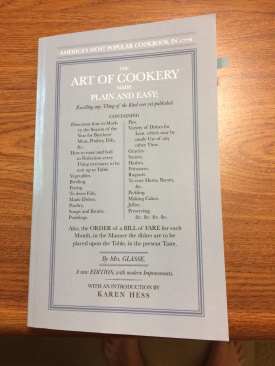 To dress a Duck with green peas

Put a deep stew-pan over the fire, with a piece of fresh butter; singe your duck and flour it, turn it in the pan two or three minutes, then pour out all the fat, but let the duck remain in the pan: put to it a pint of good gravy, a pint of peas, two lettuces cut small, a small bundle of sweet herbs, a little pepper and salt, cover them close, and let them stew for half an hour, now and then give the pan a shake; when they are just done, grate in a little nutmeg, and put in a very little beaten mace, and thicken it either with apiece of butter rolled in flour, or the yolk of an egg beat up with two or three spoonfuls of cream; shake it all together for three or four minutes, take out the sweet herbs lay the duck in the dish, and pour the sauce over it. You may garnish with boiled mint chopped, or let it alone.

Let’s look at the steps and ingredients involved here and bring them into the 21st century. First, the deep stew-pan over the fire. I don’t have a pot big enough to hold a 6-pound duckling, so that was my first stumbling point with this recipe. And I’m not using an open flame to cook anything, so I had to decide what to use. I considered using my crock pot, thinking it would be good for ensuring the bird was done through and stayed moist and tender. I could add the ingredients for the peas sauce to the pot and let it simmer.

Before I did, I pulled out my trusty Joy of Cooking cookbook and consulted it on how they recommended roasting duckling. They mentioned that duckling has a high fat content and thus should be roasted on a rack and pricked to release the fat into the roasting pan. I finally decided to do that and make the sauce separately. Unlike Hannah, I seasoned the duckling itself and put it into the oven.

For the sauce then, I waited until the duckling was nearly done before I gathered the ingredients. I did not use the “pint of good gravy” she recommended. Instead, I dissolved some low-sodium chicken bouillon cubes into hot water and used that as my “gravy.” I’ve mentioned before my dislike of mace, so I used seasonings that I know we like.

Duckling with garlic, rosemary, and thyme

When I started analyzing the original recipe I questioned using lettuce in the sauce. This was another new concept to me. I did a quick online search and found not only a discussion on why you’d want to cook lettuce but also a cool list of 10 ways to eat lettuce, some of which I hadn’t considered so thought I’d share that with you too. I cut up one small head of Italian lettuce I picked up at my local grocery store, making the pieces fairly small – perhaps one inch squares, give or take. Given that I was not sure we’d like the peas with lettuce mixed together, I decided to serve the sauce on the side so my hubby and son could add as much or as little as they’d like.

Note also that Hannah called for a “bundle of sweet herbs” which I assume means fresh herbs from the garden tied together and dropped into the pot and then taken out. Instead, I used dried herbs from bottles in my pantry, but I can’t remove them, so I didn’t use a lot.

Here’s my recipe then for duckling with peas.

Place thawed duck on a rack in a shallow roasting pan. Be sure to remove all giblets from neck cavity.

Put the pan in the oven and immediately reduce the temperature to 350°F. Roast the duck for 20-25 minutes per pound, or 2-2½ hours, or until internal temperature measured with a thermometer at the thigh reaches 185°F. Be sure the thermometer doesn’t touch the bone though.

As the duck nears being done, combine the hot water and bouillon cubes in a saucepan and stir until the cubes are dissolved completely.

Cook on medium heat until the lettuce reduces and the peas are tender. Add the butter rolled in flour and simmer until the sauce thickens.

Remove the duck from the oven when done and carve it into slices and pieces. Serve hot with the sauce on the side or you can pour the sauce over the meat if you’d prefer. 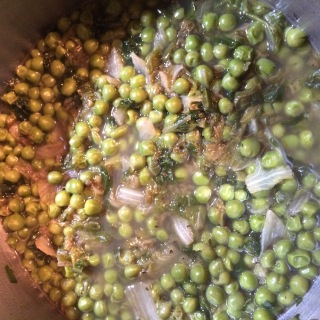 I thawed my duckling in the refrigerator. The package says to do so “overnight” which I did for two days. But apparently, that wasn’t quite long enough. When I pulled it out to cook it, there were still ice crystals on it. I had to run hot water over it and inside it to thaw it enough to remove the packet of orange sauce it came with. I didn’t see that there were giblets inside, too, so those got cooked along with the duck. I don’t think it hurt anything, though. But be sure to allow plenty of time for the bird to thaw completely and double-check for giblets.

I think if I were to make the peas sauce again, I might use fresh spinach leaves (not the stalks) instead of lettuce to boost the nutritional value. The sauce wasn’t as thick as I expected, so I might also tinker with the fluid quantity to make it saucier.

Overall, we really enjoyed the duckling alone and with the sauce. The meat was tender and flavorful, and the sweetness of the green peas complemented it well and made it look pretty, too. I was glad that the sauce wasn’t a heavy, rich one as I’m not a fan, so that was a pleasant surprise.

Next week I’m going to do what I think of as a breakfast receipt but I imagine it could be used for brunch or even supper. Until next time, I hope you have good meals and good reads, too!

In 1782, the fight for independence becomes personal in the port city Charles Town, South Carolina.

Midwife and healer, Samantha McAlester returns from the front lines to find Charles Town under British siege and the town’s new doctor at war with its citizens.

Dr. Trent Cunningham intends to build a hospital staffed solely with educated doctors. What he doesn’t need is a raven-haired charlatan spooning out herbs and false promises to his patients, while tempting him at every turn.

Then a mutual friend develops a mysterious infection. Trenton is stumped. Samantha suspects the cure but knows treatment will expose her long-guarded secret, risking all she holds dear… including Trenton.