Today’s cake recipe is more an assembly project than a straight up recipe. It’s called an Angel Food Waldorf cake and it really is divine! I recently made it for myself and hubby. I’ll tell you a little secret about that at the end, so bear with me!

I discovered this recipe when I was a teenager and really big into cake decorating. You know, the buttercream icing and pastry bags, designs and letters in various colors on the smoothly frosted cake surface. I even competed at the county 4-H fair, though I don’t recall any awards… But that’s another matter, right?

My family loves this cake. When I told my daughter I was going to make it, she was miffed because she lives in another state and so couldn’t pop in for a slice. It’s good, but worth crossing an entire state for? Probably not.

Because it’s one of my favorites, I decided to include it for the big Thanksgiving dinner in my latest paranormal romance, The Touchstone of Raven Hollow. Tara has a hard time in the kitchen for reasons she is slow to discover for herself. But by the time the family feast comes around she’s sorted things out well enough to pull this delight together. Here’s a snippet from the story to set the mood:

Tara wiped her hands on a towel and grinned at him. “That finishes the pies, and the cake is baked and ready for the final construction.”

“Are we building something?” Grant loved her quirky little smile at his question.

“You could say that. We need to slice off the top of the cake, then cut out a tunnel in the bottom and pull out the center part of the cake.” She motioned with her hands to show him what she meant. “Then we fill the tunnel with whipped cream, sliced strawberries, and slivered almonds.”

“Yum.” She was so cute when she wrinkled her brow in thought. “Then what?”

“Put the top on and smother the whole thing in more whipped cream.” She pointed to a second box of strawberries. “Some of those get spaced on top as decoration.”

“Double yum.” He gazed at his woman, drinking in her features and enjoying her animated motions with her hands. “What happens to the cake you pull out?”

She wiggled her brows with a grin aimed his direction. “That’s the best part. You get to eat it.”

With no further ado, here’s a little more detail on how to build this confection.

Bake an angel food cake per box instructions (or buy one, if you prefer); cool completely

Place cake upside down on a plate. Slice off entire top of cake about 1 inch down; set aside.

Make cuts down into the cake 1 inch from the outer edge and 1 inch from the edge of the hole in the center, leaving substantial walls on each side. Remove cake within the cuts, leaving a 1 inch thick base. 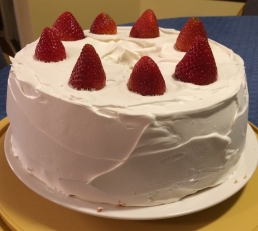 In a medium chilled bowl, mix 5 cups Cool Whip with the strawberries, marshmallows, and nuts until well blended. Press the mixture firmly into the cavity to avoid holes in cut slices. Replace top of cake and press down gently.

Use remaining Cool Whip to frost the cake. Place 8 remaining strawberries point side up at regular intervals on top of the cake. If desired, sprinkle more slivered almonds around the top.

Chill at least 4 hours before serving.

Ready for the little secret about the last one I made? Shhh! We’ve never done this before, but hubby and I ate the whole thing in 3 days! My intention had been to have him take whatever we didn’t eat to work with him on Monday, but it didn’t last that long. Talk about yummy! But not something I expect to repeat, either. (Soon, at least.)

What do you think? Are you up for putting together this light and delicious treat for your family and friends? What other berries do you think would taste good instead of, or perhaps in addition to, the strawberries?