For Fun Friday today, I’m sharing Tara Golden’s favorite things to do to relax and have fun. She’s one of three sisters who run the Golden Owl Books and Brews store in Roseville, Tennessee.

As a result, it’s pretty obvious she must love books and reading them. Her favorite place to read is in the conversation corner in the backyard of their ancestral home. Cozied up with an afghan on chilly days, or enjoying the shade on warm ones, she spends some quiet time alone with a good story.

She also likes to dress up for costume parties, especially for Halloween. Mainly, she wears a sexy witch outfit, which honestly is more reality than costume for her. She hides her special talent, healing through touch, by being a healer and midwife by avocation. When she healed Grant Markel in Haunted Melody little did she know it would open up a whole new problem for her in The Touchstone of Raven Hollow! She couldn’t sit by and watch her future brother-in-law lose his eyesight, though. So she surreptitiously worked her magic on him without him being aware. But now he’s come back to Roseville looking for answers during the week of Thanksgiving.

Here’s an excerpt of when they see each other again when he comes back into town:

Edna’s Grocery bustled with customers in the late afternoon, the parking lot a steady stream of cars and pickup trucks coming and going. Tara strolled along the sidewalk, pulling a small wagon rattling over the seams and cracks as she made her way to pick up the ingredients for dinner. Since most of what she needed was perishable, she didn’t buy them until the day she would use them to have them at their freshest. Mulling the possibilities, she left the red wagon by the soda machines and grabbed a grocery cart. She had two hours until everyone would converge upon her, expecting a delicious dinner. She had an abundance of time, and yet she hurried inside as though chased by demons. Cooking demons.

Gripping the plastic handle of the metal cart, she strode to the produce section. Tomatoes, lettuce, avocado. She quickly snatched up the fresh vegetables and added them to the basket. What else? Ah yes. She turned the cart and headed to the international foods aisle, scanning the shelves for what she needed.

“Tara?” Grant’s voice sounded behind her. “Is that you?”

Stopping, she looked over her shoulder and then angled her body to watch him approach. Goodness. How had she forgotten how ruggedly handsome he was? His lithe, easy gait carried him to her side in moments. She swallowed, aware of a tingling in her entire body as his gaze skimmed her head to toe and back to meet her nervous regard. What was he doing in the grocery? She was not ready to face him. Not prepared to experience the rush of awareness that overwhelmed her when he stood so close.

A wave of memory swept through her mind. Beginning with the instant she’d met him and sensed the potential for a deep connection with him. Then Paulette’s revelation of his illness and why he’d ventured to the small town. She couldn’t bear the thought of him suffering, so had chosen to heal him without his knowledge. Or anyone else’s. Only, Paulette had guessed and confronted her after Grant had departed for his big city life. She’d hoped he’d stay away and not question the change in his health. What if he had found out what she’d done?

“Grant.” She swallowed again, her voice weak and breathy. Calm. Breathe. She could be an adult and talk with another one. Even if he was the most alluring man on earth. “What brings you to town? I thought you didn’t enjoy the quaintness of Roseville.”

“Small towns have never interested me because too many people know too much about everybody else’s business.” He raised both brows as a smile hinted he recognized just how unsettled she was around him. “I’m only here to do a little sleuthing. Do you mind?”

Mind? Absolutely. “Of course not. How long will you stay?” Really, Tara? How inane and rude can you be? She must restore her composure, her equilibrium, or she’d mortify herself before the man. “I mean, how long will you be able to stay?”

“I’ll leave after Thanksgiving. Head to the city and civilization.” He glanced at the package of taco shells in her hands. “Is that for dinner tonight?”

Placing the box in the cart, she reached for a second one and added it to the growing pile. “Taco dinner is one of the few meals I can usually fix without incident.”

Grant chuckled and rested his hands on the metal frame of the cart. “Sounds like you don’t much enjoy cooking.”

“We take turns, so I only have to do it a couple times a week.” She shrugged and pushed the basket into motion, forcing Grant to straighten and walk beside her. Dawdling would limit the time she had to chop and dice and, worse, prolong the amount of time she’d be alone with him. “Simple fare is my specialty.”

She paused to select bottles of mild and medium taco sauce and placed them into the basket. Pushing on, she slowed her pace when she saw a sudden roadblock ahead in the form of a mini family reunion. Annoyance shot through her. She needed to finish her shopping and retreat to her home, away from this man until her sisters could provide a buffer of sorts. His presence shook her to the core with awareness and longing. Beth had already as much as claimed him. As such, Tara wouldn’t interfere with her older sister’s choice. But that meant Tara must defend herself from his nearness.

“What kind of meat will you cook tonight?” He shot a sideways look her direction and then focused on the aisle ahead of them where the boisterous family had blocked their way.

She paused, waiting for the small group of animated people to notice her and Grant, and then with a word of thanks, she continued. Turning into the condiments aisle, she picked up the pace, skimming the bottles and cans of olives and pickles until spotting what she searched for. She selected a small can of sliced black olives and a can of sliced jalapenos. “Do you have a preference?”

Grant shook his head, watching her drop the cans into the cart. “What do you usually fix?”

She spun the cart around to head up the aisle toward the meat counter. Grant fell in beside her, much like a married couple. Whoa. Get a grip. She might be in a market but not in the market for a husband. And definitely not Grant. So stand down, libido, because the man beside her, no matter how lovely to look at and how smart, was not for her.

“Lean ground beef or chicken, most often. Sometimes I use steamed shrimp, but only when I’m feeling fancy.”

“You know how to steam shrimp?” Grant tilted his head as he glanced at her. “That’s impressive.”

Her cheeks warmed at the unwarranted compliment, and a flush of pleasure swept through her. She wished. “No, I buy them already cooked.”

“Keeps it simple, like you said, and yet still healthier than red meats.” He smiled at her, taking control of the cart. “You lead, and I’ll follow.”

Tara and Grant go on a memorable hike and stumble upon the mystical Raven Hollow where they discover each other as well as the true meaning of the holiday. I hope you enjoy The Touchstone of Raven Hollow! And for those of you in America, Happy Thanksgiving! 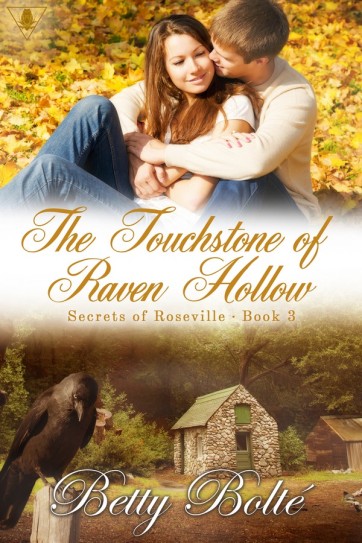 He dug for the truth and found her magic.